The history of the industrial plants of Laveno is the story of enlightened entrepreneurs, who, exploiting the resources of the territory, created a great excellence recognized all over the world.

Birth and development of the Laveno ceramics factory

In 1856 Carlo Caspani, Alessandro Carnelli and Severino Revelli, three employees of the Richard ceramics factory in Milano, set up the Società Ceramica C.C.R., making use of a disused building that had been a glass factory near the lake shore. Production, employing around 100 workers, mainly consisted in fine earthenware and fire bricks.

This initiative was characterised by a remarkable entrepreneurial audacity, due to its decentralised location in Laveno, its need to compete with well-established manufacturing companies such as the Milan-based one owned by Giulio Richard and with the highly competitive English stoneware makers.

One of the key choices for success of this initiative was an industrial-scale production of low-cost earthenware for domestic use, that could replace the copper, pewter, tin or even wooden tableware used in low-income households.

The manifattura di Laveno was thus gaining reputation, so that in1869 part of its activity had to be moved to a new building called “Lago”. Here three intermittent reverse-flame kilns were installed in 1871, the first in Italy, to fire the biscuit.

In 1875 the factory was employing 400 manual workers. In 1883 it adopted a new denomination, Società Ceramica Italiana (with a S.C.I. trade mark) that was to become famous.

During this period, S.C.I. was led by bright managers: Tommaso Bossi (who was awarded a “cavaliere” decoration) and his successor Luciano Scotti, a graduate in engineering who led the company all the time from 1895 to 1956, raising it to its top level of capacity and production.

In 1922 the first gas-fired continuous-flame kiln was built in the Lago plant. It was replaced by an electric kiln in 1936. In 1925-26 the Mulini plant was built in the Boesio area, where the blends and bodies were prepared. The Magazzini Generali, a storehouse in the Ponte area, were also built and directly connected to the railway network. Moreover, all the factory sites (Lago, Ponte and Boesio) were interconnected by a “Decauville” narrow gauge railway for transporting materials. Also in 1925 the Verbano plant was built, following an agreement with the German Rosenthal company, for producing porcelain tableware and, later, ceramic insulators.

The drive for innovation in production technologies, that took place during the Twenties, was accompanied by an equally intense artistic development. Architect Piero Portaluppi started collaborating with S.C.I. and, thanks to Luciano Scotti’s foresight, young Guido Andlovitz, who had entered the company in 1923, was appointed art director in 1925: he introduced a renewal in the style of shapes and decorations, so that towards the end of the 1920s Ceramica di Laveno competed with Richard-Ginori, whose art director was the famous architect Gio Ponti, for the leading position in the ceramic art of Italy.

Near the end of the 1930s, collaboration was started with Angelo Biancini, who created a new product line of artisan taste in the short period he spent in the company: he proposed all-round figures, small-size as well as large statues, low-relief as well as high relief sculptures, and all these absolutely difficult and engaging works could be executed thanks to the S.C.I. employees who skillfully mastered the techniques of ceramics.

In the late Forties, young Antonia Campi joins the company as a decoration worker. Immediately, Guido Andlovitz notes her ability and potential qualities, and moves her into the artistic department. Starting with her 1948 first tiny vase, she designs hundreds of objects of extraordinary artistic value and innovative character in less than a decade, becoming one of the best known ceramic designers.

In 1950 the first continuous fuel oil fired kiln for production of porcelain was started.

At the same time, a new plant (named “Ponte”) was built and dedicated to large-scale production of stoneware objects for home use.

Stoneware production employed around 1500 workers: it was the main division in the Società Ceramica Italiana di Laveno. The Verbano plant producing porcelain employed 700 workers, and it was also technically up to date.

Technical updating has supported by a company research department and by the well trained workers prepared by an internal Scuola per Ceramisti: both initiatives were set up by will of Mr. Scotti.

A three-year Scuola per Ceramisti was started in 1950-51 to provide S.C.I. workers a technical and practical training that allowed them to specialize in the ceramics craft. Since 1874 and up to 1950, professional training in Laveno had been provided by a Design School (organized by a Society for Mutual Help among Labourers, Artists, Retailers, and Professional Workers, directed by professor Mario Aubel for over 40 years and funded by the municipality and by S.C.I.). This School was no longer aligned to the professional standards that the industry required.

Beyond the Centro Studi and the Scuola per Ceramisti, a Planning department gathered artists and designers under the skilled guidance of Guido Andlovitz and then of Antonia Campi, to develop aesthetic research on shapes and decorations, leading to creation of valuable artistic ceramic objects.

Meanwhile production was diversified into:

These successful innovations were presented at major trade fairs in many countries: France, Belgium, Luxembourg, United States. Laveno was at the centre of the Italian tradition in ceramics, like Murano in glass and Faenza in maiolica. 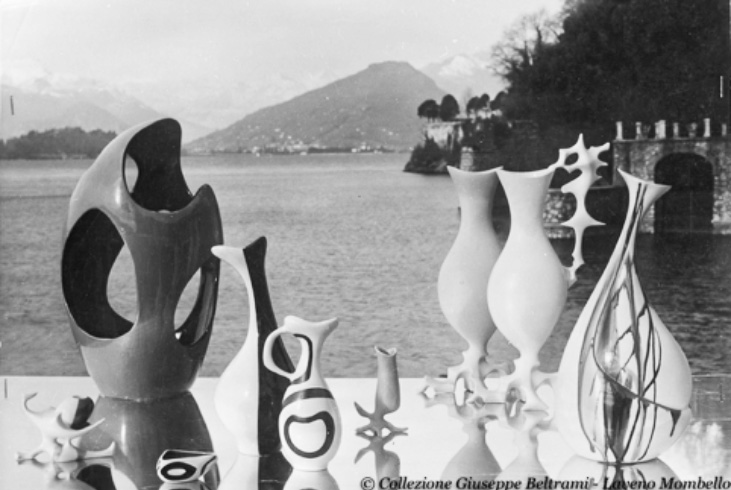 The photographs in this section belong to the Giuseppe Beltrami collection.